Chef Patrick Kriss who operates the award-winning and the #1 voted restaurant in Canada, Alo has opened a new sister restaurant, Aloette on Queens and Spadina and well, having been there twice for lunch and dinner I can simply say: the restaurant is worth it. 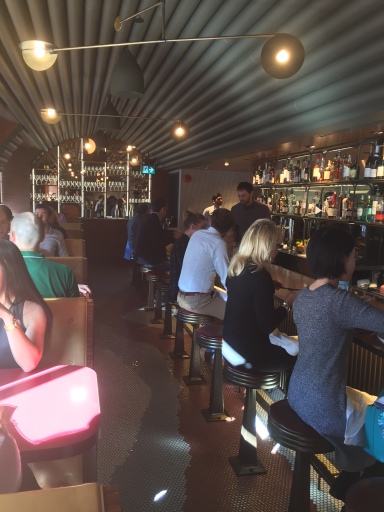 Aloette is a modern take on a classic diner from its interior to the dishes. This narrow, cozy space with vaulted ceilings and a wooden bar with stools all add to that casual and old school atmosphere. 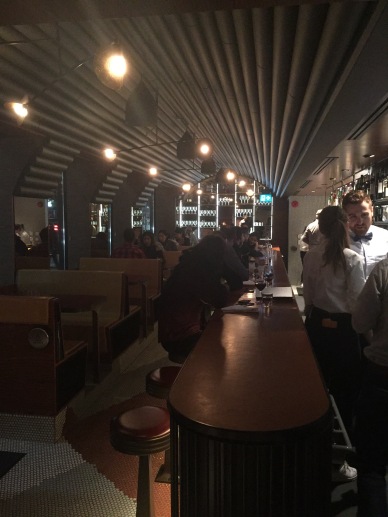 In addition, the few available booths with benches that are dressed with leather and wood emphasize the modern diner feel the restaurant seems to be going for. Even with its casual feel, the restaurant manages to keep an elegant aura about it.

The service is immaculate. For lunch, we were sat at the bar and our waiter had extensive knowledge both about the drinks and the different dishes. Even with 2 hours wait on a Thursday night, the restaurant staff remained professional and efficient while providing for an enjoyable dinner.

Aloette’s food can be described in these following words: simplistic and flavoursome while giving utmost attention to the ingredients and detail.

To start, we ordered the charred chorizo which also consisted of eggplant, halloumi, basil, and olives. 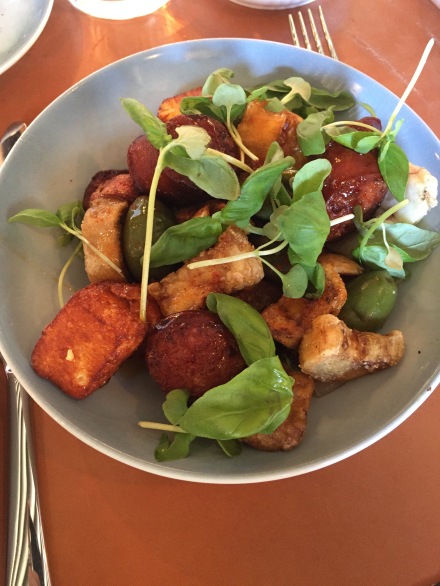 The chorizo was nicely charred from the outside while being tender and soft from the inside. The different components of the dish allowed for different flavours which all complimented each other. The shining star was the eggplant for me. It was unlike any eggplant I had eaten before. I always find eggplant to be more on the bland side yet Aloette manages to avoid that and makes them deliciously.

Another starter we ordered (this time for dinner) was the beef tartare with lettuce. 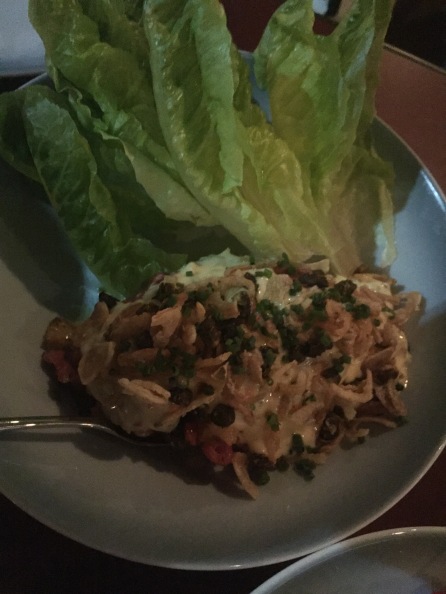 The tartare was topped with a horseradish and dijon sauce making it a fresh and tasty dish. The slight spice tinge of the beef with the sauce provided for a nice contrast when it was eaten with the cooler lettuce.

The main I ate was the Aloette burger which consisted of fried beaufort cheese, onion, lettuce and pickle on the side. It came with fries and a sauce I had never tried before. 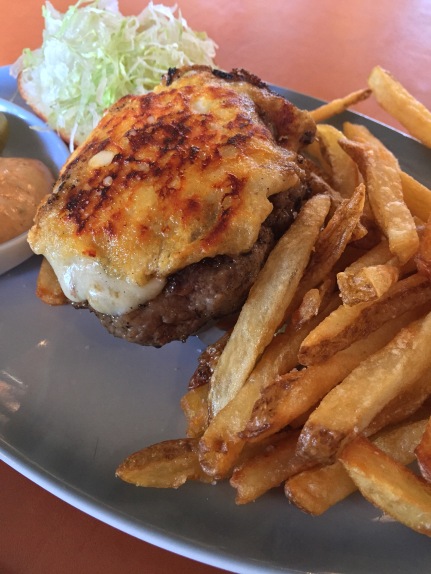 The patty was cooked to perfection. It was juicy and soft. The accompaniments added to the taste of the burger as a whole rather than the patty being bland and the toppings being the only thing providing flavour. 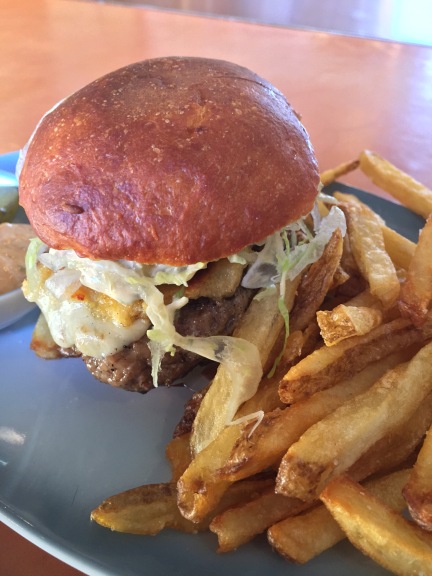 The fried cheese wasn’t too strong which I liked and the accompaniments did not overwhelm the taste of the patty. The bun was soft allowing for a comfortable bite.

Onto the desserts. Aloette only has two desserts to choose from and I tried both of them. The first one was an apple pie sundae. 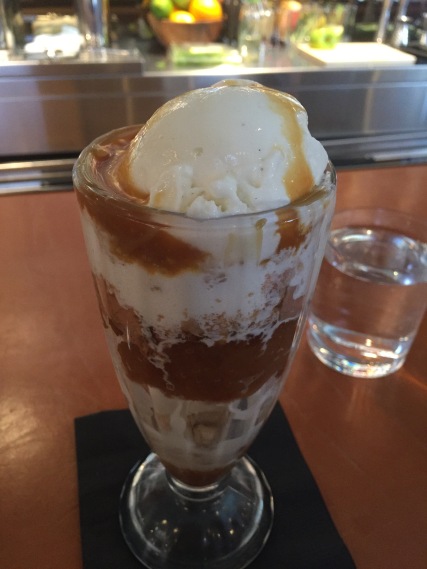 This is quite a heavy dessert especially considering the preceding plates themselves are quite hearty and so it’s probably a good idea to share this one. Nevertheless, it is an absolute great way to finish of a great lunch or dinner. What is great about this sundae are the different layers that just work with each other: the ice cream, apple crumble, caramel sauce and the apple pie itself all alternating within the glass.

The 2nd dessert is a lemon meringue pie. 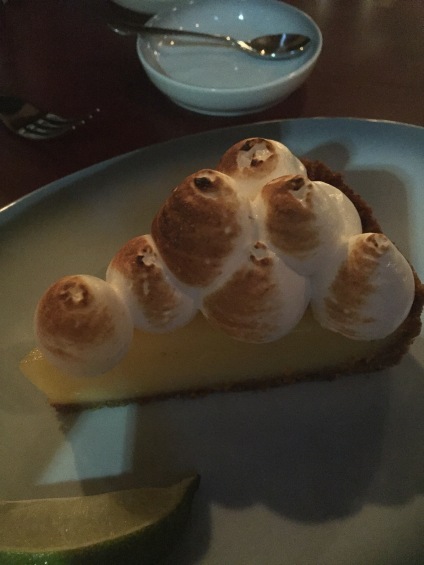 I’m usually not the biggest fan of lemon based desserts but I really liked this one. It wasn’t too sweet and the slightly burnt cream on the top acted as a buffer against the sweetness. The fresh flavour of the lemon in the pie punctuated a great dinner.

Finally, the drinks. I had a bramble milkshake which was an alcoholic milkshake consisting of tanqueray rangpur, raspberry and coconut. 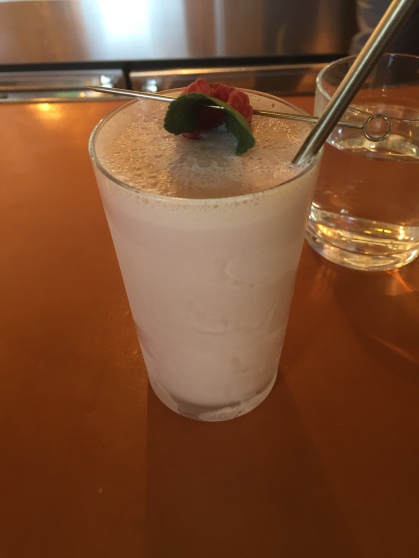 I usually don’t drink much alcohol so I’m probably not the most qualified person to ask one of his opinion on alcohol but this drink was really good. It had the perfect balance between alcohol and the milkshake part for me with the alcohol acting a counterbalance to the taste of the coconut.

Chef Patrick Kriss has succeeded in creating a modern ‘diner’ that serves simple yet flavoursome food. This is easily one of the best restaurants I’ve eaten at in Toronto and after already visiting it twice, I am definitely going to go back. The only negatives I would say are the waiting times which can go up to 2 hours like I mentioned before and the dishes are substantive so sharing appetizers is definitely a good idea.